My relationship with anger is very messed up.

Luckily, I know it, so I don’t trust anything about anger except for the fact that I feel angry sometimes.

I remember feeling angry when I was a child, but mostly I think I just felt overwhelming frustration that I confused with anger. I would say that my middle name was frustration, but frustration was probably actually my first name. And my last name.

I was frustrated for sure.

I grew up being everything that didn’t yet have a name to identify it. I was a nerdy but cool kid – long before the two types could form a socially acceptable and recognized hybrid. I was an introvert with excellent social skills so I was constantly mistaken for an extrovert. But instead of being congratulated for being out of my shell when I was out of it, I was questioned about why I was in my shell when I was inside of it.

I heard that a lot.

And I had depression despite also having a sometimes sunny but almost always enthusiastic disposition.

Yeah. I had depression but I didn’t act depressed. Instead, because I got the genes, I acted engaged, interested, curious, aware, inspired, driven and excited.

So who could have thought it was possible for me to have a depression monster inside of me too?

I was just the depression monster’s bitch.

So I’m sure I experienced anger when I was younger. I just think I had no idea what it was or what to do with it.

And I’m positive that I never learned what to do with it.

Because to me, everything that happened in my life ended up becoming part of the negotiations with the depression monster.

But now I’m an adult with lots of skills and lots of experience and far less patience for the monster. I think of the depression monster as being inside of me but asleep. Or dormant. Or just not up to getting all in my face.

I work hard on a daily basis to keep the monster quiet. It turns out that life is much easier with a monster who’s asleep.

But sometimes I get angry. Or anxious. Or sad. Or frustrated.

Sometimes, because I’m human and because I’m living the life of a human, I feel the things that everyone feels.

And then I get confused because my experience with “everything else” is fairly limited.

I’m not typically an anxious person, but when I do experience it, I know immediately that I really don’t like it.  And in a way, I feel lucky because I think mild depression is probably easier to manage than any level of anxiety. That is NOT an informed or educated opinion. It’s just a guess based on never having lived the anxiety-ridden life.

I definitely don’t like sadness or frustration either, but I have come to realize that both will happen on occasion. I’ve learned to think of both states as “normal” in a reasonably normal life.

That just leaves anger and I’ve found anger to be completely confusing.

On the one hand, I hate anger because it’s an overwhelming feeling for me and I don’t particularly enjoy overwhelming feelings of anything. On the other hand, now that I understand that a certain amount of anger is “normal” and “acceptable,” I kind of enjoy going with the anger flow for a little bit.

I like saying a lot of dramatic, exaggerated versions of ‘F___ THAT!’ in my head.

I fantasize about telling people off. And then knowing that I told them.

And then, of course, I worry that maybe I’m enjoying anger too much. Like maybe I’m an officially angry person.

So tonight, after thoroughly enjoying a short but highly poignant period of anger, I looked up anger online. I was hoping to find a test that would tell me whether I’m a normal person who experiences anger sometimes or whether I’m the opposite – a maniac who keeps my anger under control but is always on the edge of totally losing it.

I found a test called the Anger Test at a site called angermanagementresource.com.

Unfortunately, despite countless efforts, I could not get the ‘Start Test’ link to start the test.

So I got angry. And frustrated. And sad.

And then I wondered if the broken link was the actual test of how angry one gets.

And then I was pleased that I hadn’t kicked in my computer screen just because a link didn’t work.

Here is a list of the questions on the anger test. I don’t know for sure what the good or bad answers are supposed to be but I can guess.

I’ll have to ask other people about Number 2….whether they think I’m angry. I’m kind of scared to know what they think. If it turns out that everyone thinks I’m just angry, I may have to rethink my life plans.

And then I’ll have to call a psychiatrist and ask whether Number 18 is a critical question because I do Number 18 every time I get angry.

But don’t worry. I always include going to prison voluntarily in my revenge fantasies.

Because however angry I might be, I am far more into accountability. I would never take revenge and then even try to get the sentence mitigated.

I’m SO not that person. I would serve a sentence without requesting any leniency despite my exemplary behavior.

I also have a feeling I could help some of my cellmates be less angry. Because I think I can help people with that sometimes. Especially if I understand why they’re angry. 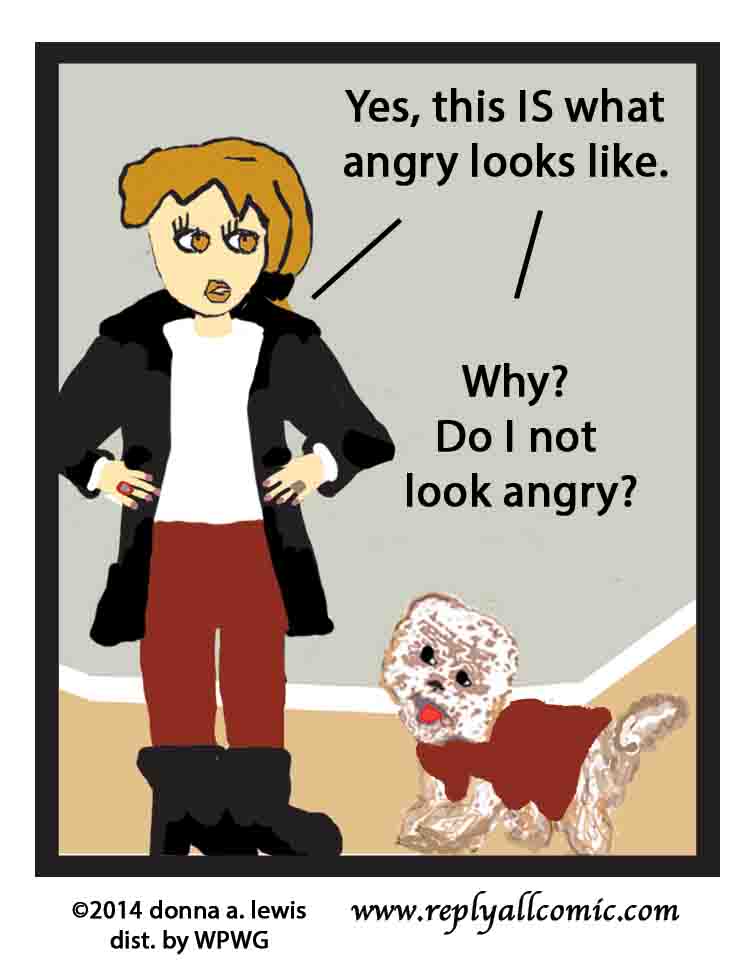