Reprinted from THE GOCOMICS BLOG! December 20, 2014

I always knew I would spend my life being a writer, but I never ever considered being a cartoonist. I was the kid who was writing or reading every minute I was awake. I was the kid who finished my assignments and exams early in school so that I could get back to whatever I was reading or writing. I was the kid who found almost everything besides reading and writing to be boring and ridiculous and a waste of time.

I was that kid.

Unfortunately, I was that kid before the Internet arrived in our lives, so my access to really creative people was severely limited. I was not surrounded by creative people. I was surrounded by people with stressful day jobs and extra-income evening jobs who urged me to do whatever I wanted to do as long as it included getting an education and a job that paid a living salary.

So I got an education and a job. Usually I had many jobs at once, making money however I could make money. I became a lawyer because I figured being a lawyer would enable me to combine the two things I loved the most: writing and good deeds. Except that I called good deeds ‘advocacy.’ Good deeds are what you do when you’re a good person. Advocacy is what you do when you need to put your good deeds on your resume so you can get a better job.

For years and years, I worked as a lawyer, helping people to make their lives easier, better or more fair. I worked in the areas of disability and employment, making a difference I could actually see and a difference I cared about a little too much. At night I taught classes and tutored wannabe lawyers. In Washington DC, tutoring can easily support a fledgling law practice.

And I kept writing. I wrote essays and really bad books and blogs and anything I could get anyone to read. The Internet had come along by this point and now I had a platform. I built a crude website named after my cat Boo and I drove unsuspecting friends and family there to get feedback for my writing. Little by little, people I didn’t know began reading my writing, opening me up to the idea that you can find an audience outside of your known world. I started the process of learning what people enjoy reading. And I began writing for an audience that might someday buy a book filled with my words.

So it turns out that stand-up is really just a variation on writing. You spend every waking moment of your life writing material. And laughing. To yourself. You write a ton of material and laugh to yourself and wonder if anyone else would laugh at what you just wrote. I loved stand-up. Unfortunately, almost all stand-up occurs late at night in places where people are drunk. I wasn’t very good at being part of that scene. I knew that stand-up couldn’t last long but I also knew that I loved writing humor for the sake of the punch line.

One day, in early 2007, it snowed on a Saturday. I was in the suburbs of Maryland, just outside of Washington DC. One Saturday a month, I did a workshop for people transitioning from crisis back to functioning. I helped them with legal issues and some of the other challenges that accompany hard times.

In Washington DC and the surrounding areas, even the mention of snow shuts everything down. And it was actually snowing pretty hard. So nobody showed up. It was just me, the social worker on duty, and a few others who tended to hang out at the center where we provided workshops.

The social worker pulled out art supplies and snacks while we hunkered down to wait out the snow. We drew flowers and houses and little stick-figure families. We weren’t artists, but we had snacks and crayons, so we were happy adult children.

I drew a stick-figure girl who I thought looked like me. She had a lot of hair and a really big purse. Then, in a moment of accidental creativity, I gave her a punch line. And I laughed because I always laugh at my own jokes. 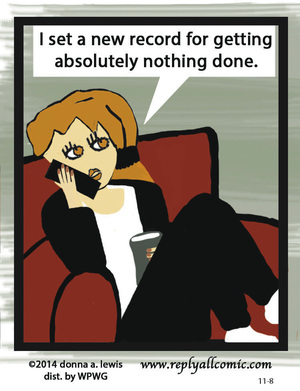 The next day, I scanned the girl with the punch line and emailed the image to my small but loyal following of readers. They liked her and asked for more. So I kept drawing her. And I gave her more funny things to say. I drew her every day. And I created  friends and family for her, mostly similar to my real life family and friends.

I created many, many cartoons for several years. I didn’t know how to draw, but little by little, I was learning. And I loved it. I loved my characters and my words and I loved the process. I posted cartoons wherever I could, paying attention to what people laughed at easily and what made them uncomfortable or angry.

And then, one day, an acquaintance who worked at the Washington Post asked me if I’d like to talk to the cartoon editor. I said YES, of course. The cartoon editor turned out to be Amy Lago.

By the time I met with Amy Lago, I had read every word she had ever written about editing and listened to every podcast for which she had ever been interviewed. I knew as much about Amy Lago as I possibly could know, which really wasn’t much. Mostly, I just knew that she seemed really smart, really cool, really open to finding new laughs, and really down to earth.

I brought a collection of cartoons to Amy Lago at the Washington Post. She never looked at them while we talked. I have no idea what we talked about, but I remember thinking she was the most amazing person I had ever met and that she had the coolest job in the world, working at the Washington Post alongside such talented writers and creative, smart minds.

I walked straight from her office at the Washington Post to a coffee shop on the corner and turned on my computer. I researched the month of May to see why in the world May would be a cartoon editor’s busiest month. I pretty quickly found references to cartooning award ceremonies and events and realized that May is the Oscars Month for cartoonists. I called my mother to report that Amy Lago had not lied to me and that we might have another date in our future.

I heard from Amy Lago after the cartooning Oscars (otherwise known as the Reubens). She liked my humor. She believed I would learn how to draw eventually. She thought that words were important and that my poor drawing didn’t stand in the way of my words, necessarily. She loved my characters. She asked if I could put together a package of cartoons that was more cohesive, with characters whose relationships were more easily identifiable and, for lack of a better word, “followable”… .

I spent the next month obsessing about getting a package of 40 cartoons to be as perfect as possible. I delivered them to her and she invited me to keep sending her cartoons by email. I sent her a cartoon every day for months. She told me what was good and what to change. I edited and revised every single cartoon. She helped to develop my ideas into a comic strip that made sense.

On August 12, 2010, I was at work when I heard that Cathy Guisewite had announced her retirement. I immediately called Amy Lago who had heard the news only a few moments before I had. By that point, I had hundreds of cartoons ready to go. I was ready to go and a female cartoonist was preparing to leave a void in the world of female cartooning. I wanted to help fill that void.

I was signed on to the Washington Post Syndicate in October of 2010 and my cartoon began running in February of 2011, on Amy Lago’s birthday.

I will never be able to describe how much work it took to develop a comic strip. I worked day and night. In addition to my day job, I worked on the cartoon compulsively. I said no to everything, including family and friends. I lived for the cartoon, thinking about material every minute of the night and day. I thought of so much material that a second cartoon was born, a “lite” version of the strip. That version became syndicated in February of 2012.

I still lawyer by day, although I have very recently transitioned to a less-stressful lawyering role that I perform mainly at home. Basically, I review legal files and write legal documents all day long.

At night and on weekends, I write and draw my strip. And I practice drawing every single day. I’m happy to report that I’m getting better at drawing. Maybe one day I’ll take a drawing class, but I’m not in a rush to get formal art education. 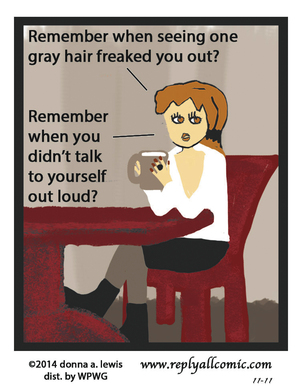 Here are a couple of fun facts that really aren’t all that fun:

(1) I don’t read comic strips or cartoons because I don’t want to muddy my brain with other influences. A long time ago, I read Doonesbury and The Far Side to the point that I had memorized pretty much everything available from those creators.

(3) I draw every single day, because I really enjoy drawing.

(4) I would continue writing and drawing cartoons even if I wasn’t syndicated. I love the vehicle of humor for communicating with other people.

(5) I’m still the biggest introvert in the world and I couldn’t get cabin fever if I tried.

(6) I’ve heard from haters who think I suck and should die. I learned how to ignore them since they don’t contribute in any way to my inspiration or motivation. And they’re rarely fun or funny.

(7) I love my followers and wish I could thank each one in person.

(8) I love Amy Lago in a way she should be seriously scared of.

(9) My top priority still is – and always will be – health insurance.

(10) I still have no studio. I live in Washington DC, where space is very expensive. I have a collection of folding tables I set up and take down every day, as needed. A tour of my studio would not be inspiring or impressive.

I hope anyone who reads my accidental cartoonist story takes away three things.

First, you cannot only do whatever you want to do, but you should be open to doing things you never planned or expected to do. It’s really cool to see where life takes you when you let it take you.

Second, anything worth pursuing is a total effing ton of work. There are no shortcuts and no such thing as overnight success.

Third, having a day job really helps to keep the lights on.

My first book should be out in February 2015.  I’m really happy to have a book I can give to my mother. I’m still not sure she gets what I do with my time.