I started losing my car several years ago.

I easily lost it in parking lots and on the street. Even better, I began losing it in my own neighborhood. I would walk in circles around my neighborhood, making myself late for everything, just trying to remember where I had last left my little black Civic.

One night I met my brother and his kids for food and music in Silver Spring, a part of town I tend to get confused in anyway since it’s gotten much bigger and busier in recent years. We had a great time, as always, and then walked back to the multilevel garage where we had both parked. After walking around two levels where I was sure I had parked, my brother drove me around the lot until I found the car.

My niece, maybe about 7 years old at that time, suggested that next time I take a picture of where my car is parked.

And now I photograph everything.

The history of my car’s whereabouts can now be found in my phone and I have cut way back on being late from car loss.

Here are some other tips too, from lifehacker – including how to locate your car on Apple maps, Google maps, and with an assist from Siri.  You can use Waze too.

My nephew’s best piece of recent advice was to unplug devices, not just turn them off.

I no longer debate with myself over whether I turned my curling iron off before I left home.

I still need to find ways of not losing my keys inside of the house.

How to read your dog.
@TheDogDaily @GoComics 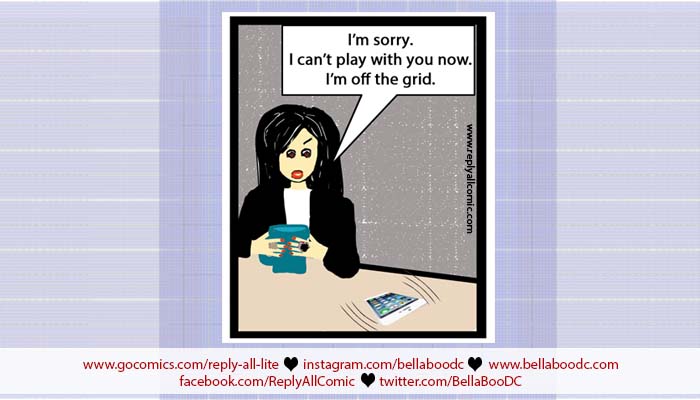 Going off the grid: easy. Staying of the grid….not so much.
@gocomics  @dailyzen @WIRED #offthegrid #SundayFunday