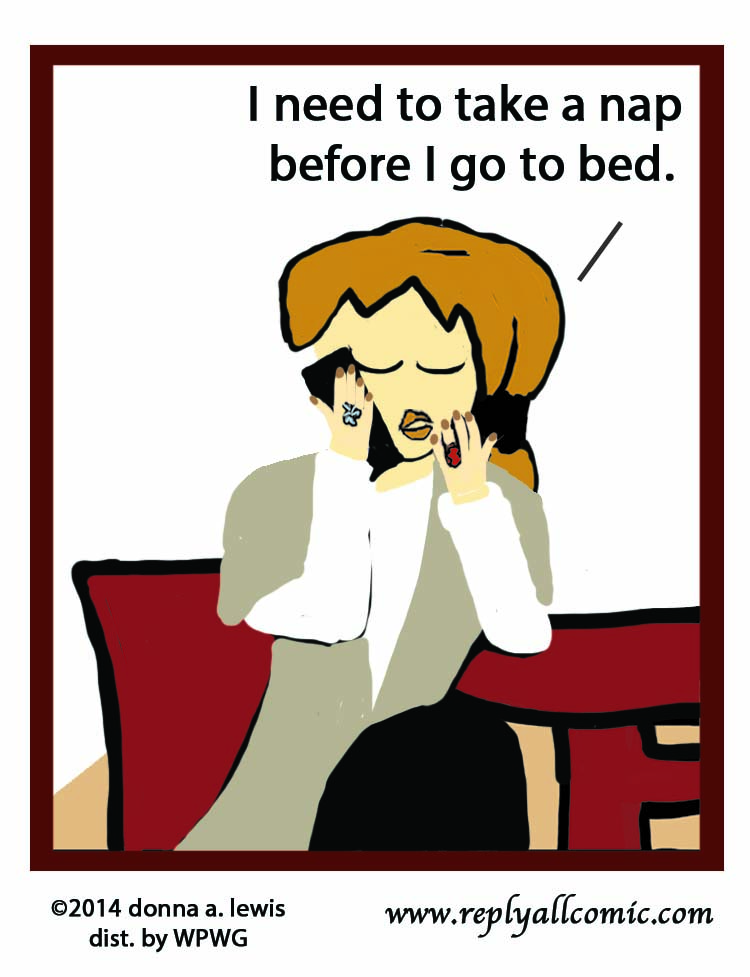 A few years ago, a journalist asked me if I wanted to be interviewed for a website about women. The topic was second careers and all that kind of stuff.

So we began talking.

I explained how I had always wanted to be a writer and how I had, in fact, been writing every day of my life. I explained how, in 2006, I hit a wall of writer frustration and decided to take a formal and official creative break from writing. I regaled the journalist with anecdotes about my attempts at improv and stand up and how a love for writing punch lines ultimately led to my accidentally creating a comic strip.

The journalist was excited by the details of the years from 2006 until 2010 when I got a syndication deal. She listened to the numbers – six four-panel strips a week plus an eight-panel strip for Sunday. Fifty two weeks a year. No break. Those were the first year numbers.

By the second year of syndication, I had enough material for a second property, a single-panel cartoon. And I usually created two of those a day since I was trying pretty hard to build a loyal and interested following of readers.

She said “wow” and I remember feeling quite proud of my numbers.

I told her about my loyal followers and how they sent me really engaging emails and notes on the internet. I told her I was really pleased to have found a following of many women and some men who appreciated my observations about life. I told her I was working on a book. And licensing opportunities.

The journalist was impressed.

Then she asked about my day job. I explained that I was a lawyer and that I was pretty passionate about my work and that I had thus far managed to continue working full-time as a lawyer. I explained that I needed my lawyer job for a variety of reasons, including the salary, the health insurance, the routine, the social aspect, the perspective, the balance, the challenge, and, of course, the material.

I could hear the whistle of the happy air leaving the journalist’s happy balloon.

Oh, she said, I was really looking to interview women who gave up something to do something new.

I said, well, that’s great, but it’s hard for normal people to give up their life to do something new. I think I’m a really good role model for someone who wants to maintain their financial independence and still pursue their dreams. Financial independence is a really big deal, especially for women.

I may have been a bit aggressive when I added the part about financial independence being especially important for women.

She wasn’t buying it.

It wasn’t sexy or inspiring, in her view.

I was shocked, to be honest. I was particularly shocked since the founder of the website the journalist was writing for had been one of my earliest and most important role models. I wondered if my role model felt the same – that pursuing your passion is only sexy and inspiring if you give up everything to live in a car or travel to India to live with monkettes.

The journalist told me to call her when I quit my lawyering job.

I politely said thank you.

Then I hung up and said a lot of things that don’t sound even remotely like thank you.

I then called my mother, a woman who has bravely suffered through the pain of having a daughter who constantly wants more in life.

“Mom,” I said, “the journalist for XYZ website said I haven’t given up enough for my writing and the comic strip.”

My mother wanted to call the journalist or email the journalist or otherwise set the record straight.  I didn’t give her the journalist’s information. We’re still recovering from the time my mother called the local paper to complain that she’d have to move to another city if she wanted to read her daughter’s comic strip in print. It’s a sore subject for her.

My mother proceeded to list everything I had given up for my passion. It was depressing hearing my life summed up by my mother.

If you’re a writer, an artist or a person who has relentlessly pursued a passion, your list probably looks similar to mine.

As much as I’d love to eat, love and pray my way to happiness, I’m a real person with a real life. I have real bills and real medical issues. I have real family and real friends and real neighbors. I can’t just give up everything. And I can’t just pick up and leave my responsibilities. And I need my health insurance.

But I still pursued – and continue to pursue – my passion.

I hope somebody taught that journalist what sexy and inspiring looks like. I think she got it wrong.