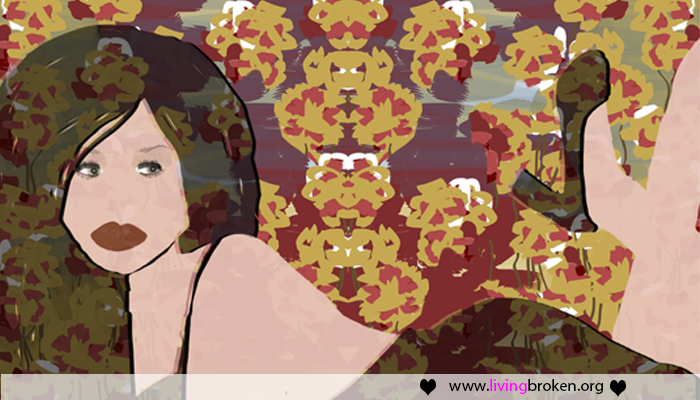 I try not to think about how much of my life has been focused on my brain trying to kill me.

It’s depressing to think about the waste of years.

It’s been decades of my brain urging me to do destructive things to myself and me trying to hang in there because hanging in there is what we’re supposed to do.

The problem with hanging in is that it becomes more and more exhausting as time goes on.  The strength you relied on in your early years just isn’t reliable decades later.

It gets harder to hang in and even harder to want to.

Don’t you mean fight back?

Have I been fighting back against my destruction-driven depressed brain?

Well, yes and no.

But when I’m not fine, I can only hang in there.

And I can barely do that.

When I’m not feeling well, I rely on a patchwork of family, close friends, doctors, therapists, medications, practiced habits, emergency measures, routine and luck to get me through.

There have been times when all of those have worked together well, like a beautiful tragic symphony.

And then there are those times when disconnects made hanging in there tougher than usual.

Sometimes the side effects of medications made things worse instead of better. Sometimes something simple like the nuisance of a holiday interrupted the safety of my routine.  And sometimes one or two of my key players weren’t available or were taking care of someone else.

The thing is, life happens.

Life happens all around you while your brain is trying its best to kill you.

One thing that would be really valuable in the fight against depression and suicide is hope.

What if there was hope that things would be better?

If there was actual, realistic, reasonable hope, maybe we could learn to fight back and not just hang on.

But hope is hard to come by in the fight against depression.  Depression takes everything from you, including your ability to see life possibly being any different.

I definitely approached my fifties without hope.

My bad brain was still in charge of everything.

And at the end of the day – each day  – I literally wanted to die.

So when I turned 50, I was surprised.

I hadn’t planned to be alive at the age of 50. I never thought I would make it that far.

But there I was, 50 years old and very much alive. I was alive, generally healthy, and more suicidal than ever.

I was more suicidal than ever and there were fewer options for me than ever.

I began looking at clinical trials of new medications and treatments.  I decided to try whatever I could before my next down cycle, which I was sure would be my last.

One of the treatments I came across in clinical trials was Ketamine.

I read about how Ketamine was helping suicidal people within hours or minutes of delivery with minimal to no side effects. They key to any treatment for me was the side effects. I was working full-time and could only continue working if a treatment did not disable me.

As anyone who has tried depression and related medications knows, the side effects are hard to live with. It’s hard to hold onto a full-time job if your medication sedates you or takes away your ability to keep your balance while walking.

And those are two of the easier side effects.

(I’ll post links below to helpful information about Ketamine. There are clinical trials you can check out now and, as I’ve mentioned here before, treatment options are becoming available.)

Anyway, this week will be my twelfth Ketamine treatment and I’m ready to start writing about the experience now that I’m not scared to death (no irony) that it won’t work.

It was obvious immediately after the first treatment that Ketamine was doing something, but it wasn’t clear how long the effect would last.

And the worst feeling in the world for me is that period when you’re just waiting for things to get worse.

But twelve treatments in, things are better.  And I’m starting to have confidence that the effects are lasting long enough to live a little.

But for those of us who spend each day just trying to stick around, it’s enormous.

I spent the first half of my life grudgingly trying not to die.

Now, I’m not the type to spit out magical movie-like sentiments like ‘now I can focus on living.’

But actually, to be honest, now I feel just a little bit like I can focus on living.

Logistically, I can actually turn my focus to the business of living.

With ketamine, I have freed up significant time and energy that was before focused on planning my demise or keeping my stealth plans from well-meaning intervenors.

Every day, my brain was tied up either planning destruction or fighting with me as I tried to do other things like get up, leave the house, go to work, and live a productive normal life.

And now there’s just not a battle playing out in my brain.

There’s still a lot of discussion in there.  My brain raises a lot of issues and agendas.

But it’s not a battle.

Honestly, I never imagined I would face the future with hope. Hopelessness was my life.

Hopelessness was my default, my high, my low, and my habit.

But Ketamine has given me hope.

And hope is even more amazing when you’ve been out of it for so long.

Hope means that there’s an actual reason to be around for tomorrow.

Ketamine gives me ‘an actual reason to be around.’

Ketamine won’t be for everybody, but there are so many ways to find hope out there.

If you know someone in pain, find a way to give them hope.

Even if it’s just a little, know that a little hope can get someone in pain through a really hard time.

More about the Ketamine experience coming up soon.

Because I see more writing in the future.

And because I see a future.

This past week, NPR reported on a new variation on repetitive transcranial magnetic stimulation (rTMS) called…

“My love for skateboarding … has saved my life so many times.”