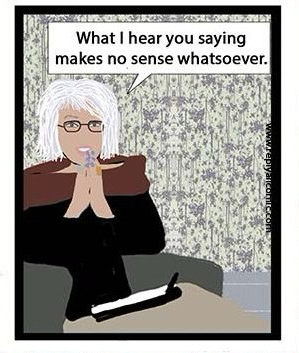 I’ve been considering loose structures for a regular blog.  I feel like having a loose structure would be easier to maintain than the current ‘when I’ve got something to say‘ approach.

Even if I don’t have much to say, a loose structure would provide me a nudge toward something, right?

But none of the loose structures I’ve imagined have inspired me.  For some reason, I keep coming back to “tell me your peach and pit” or “what are your top ten whatevers?”

The problems with a top ten list are obvious.

What if you can’t come up with ten items?

But what if you can’t decide on the theme of the list?

Top movies, artists, comics, shows? Top favorite cuss words?  Top YouTube videos?  Anything can be communicated via the mechanism of a list, and yet I’d have to constantly make a decision about what subject matter today’s list would be.

So what about the “peach and the pit,” as the Kardashians say.

I’ve heard the concept conveyed in many ways…you know, reporting on the high and the low of your day.

What’s the rose of your day and what’s the thorn? Blah blah blah.

The problem I have with the recap of the highs and lows is that the exercise basically only works if you’re not too low.

I guess I’d have no problem telling my peach and pit if  I were a Kardashian.  I’m not saying Kardashians don’t have bad days. I’m sure they do.  But I’m guessing the basic Kardashian is light years ahead of me in terms of surviving a bad day with grace.

But if your lows are really low, and you don’t have the fully stocked kitchen or huge salads or private pool to ease the pain, the recap is just depressing.

For me, living with depression, my lows are capable of really and truly sucking.

Luckily, I manage them well most of the time.

Sure I think about killing myself anytime I’m reminded of death, but I’m also able to distract myself from the thought.

I wish I was joking when I say I think about killing myself and then distract myself by looking at the CVS weekly deals.  It’s kind of funny if you don’t mind the first part of the sentence.

But mentions of death are a 100% trigger for me. Unfortunately.

Luckily, CVS weekly deals are pretty much a 100% guaranteed distraction!

P.S. If you ever need to know the CVS weekly deals and don’t feel like looking them up, just text or email me.

So highs and lows of my day?

My official daily wellness plan rejects voluntarily considering lows.  It’s just not helpful for me.  It’s not soothing either.  AND it  could be a trigger given the right combination of circumstances.

But I still like the idea of a structure.

A structure that provides room for interpretation.

Then I thought about “Something old, something new…”

Here’s the actual meaning, according to The Knot:

This tradition comes from an Old English rhyme (“Something Olde, Something New, Something Borrowed, Something Blue, A Sixpence in your Shoe”), and the four objects that the bride adds to her wedding outfit or carries with her on the big day are just good luck charms. Don’t stress too much about them—they are the little tokens of love your mother, sister, other relatives, and attendants will give you at the eleventh hour (although you can give them to yourself, too). Something old represents continuity; something new offers optimism for the future; something borrowed symbolizes borrowed happiness; something blue stands for purity, love, and fidelity; and a sixpence in your shoe is a wish for good fortune and prosperity, although this remains largely a British custom.

So the rhyme is comforting. And using a structure of something old, something new, something borrowed, and something blue (SOSNSBSB) would nudge me to talk about continuity, optimism, happiness borrowed from others, and love.

That sounds good to me.

Yesterday I watched Steve Martin‘s Shopgirl for the billionth time.  While I was drawing cartoons, I needed something in the background that would feel familiar, not too stimulating and just the right amount of sad, poignant, hopeful and edgy.

I think loving two of the three characters get it right.

Maybe I recognize the story and I definitely identify with the main character.

Oooh! And Shopgirl introduced me to The Volebeats!!!

So thank you, Steve Martin, for a really good and inspiring couple of hours.

Well, now it will seem like all I do is watch movies and tv shows, which is kind of true. But my something new is actually a blend of old and new.  I spent the weekend (and am still) watching Seinfeld‘s Comedians in Cars Getting Coffee on Netflix.

I had watched Comedians before it was on Netflix and just discovered it on Netflix now that I have a Roku stick.

I am officially adding Comedians in Cars to my collection of stuff to watch while cartooning.  My collection is pretty small, actually.  It’s mostly Gilmore Girls, Ally McBeal, Beverly Hills 90210, Teen Mom and Melrose Place. I just watch these shows on loops.  Every few weeks I shift from one show to another.

The life of a cartoonist.

But I had a visit from my sister-in-law Kakki whose amazing book on discipline is coming out this spring and was able to borrow some humor from Kristen Wiig for use in my convo with Kakki.

I am sorry to say that Kristen Wiig does not have her own website because if she had one, I would have perused it this afternoon and used it to delay getting other tasks accomplished.

But I did find the scene I almost acted out for Kakki.  I didn’t act it out as much as I described it.  It’s the airplane scene from Bridesmaids. Specifically, it’s the part where Kristen Wiig’s character Annie makes fun of Rose Byrne’s Helen. Right before she gets into it with the airline attendant Steve. Before she sees the Pilgrim woman on the wing of the plane. You know…….  Click here to watch it.

So I guess I borrowed some of Kristen Wiig’s humor and some of my sister-in-law’s happiness, which I tend to borrow since she usually tends to have extra.

Borrowing happiness is a good thing to do.  And it’s better than borrowing other things.

With regard to blue, I’ll just say I’ve been paying attention to blue a lot lately.  I have about ten new blank canvasses that are ready for paint and my plan is to cover them with shades and layers and lines of bluish grays.  I like bluish grays and especially like to see them come to life on canvasses.

So blue may be a theme for this January, maybe longer.  I’ll try to share as much of the blue as I can, as I create it.

For now, I’ll just share my most recent painting, which has some gray.  It’s the last painting I finished.  She might look familiar since I’ve drawn her and painted her a few billion times now. 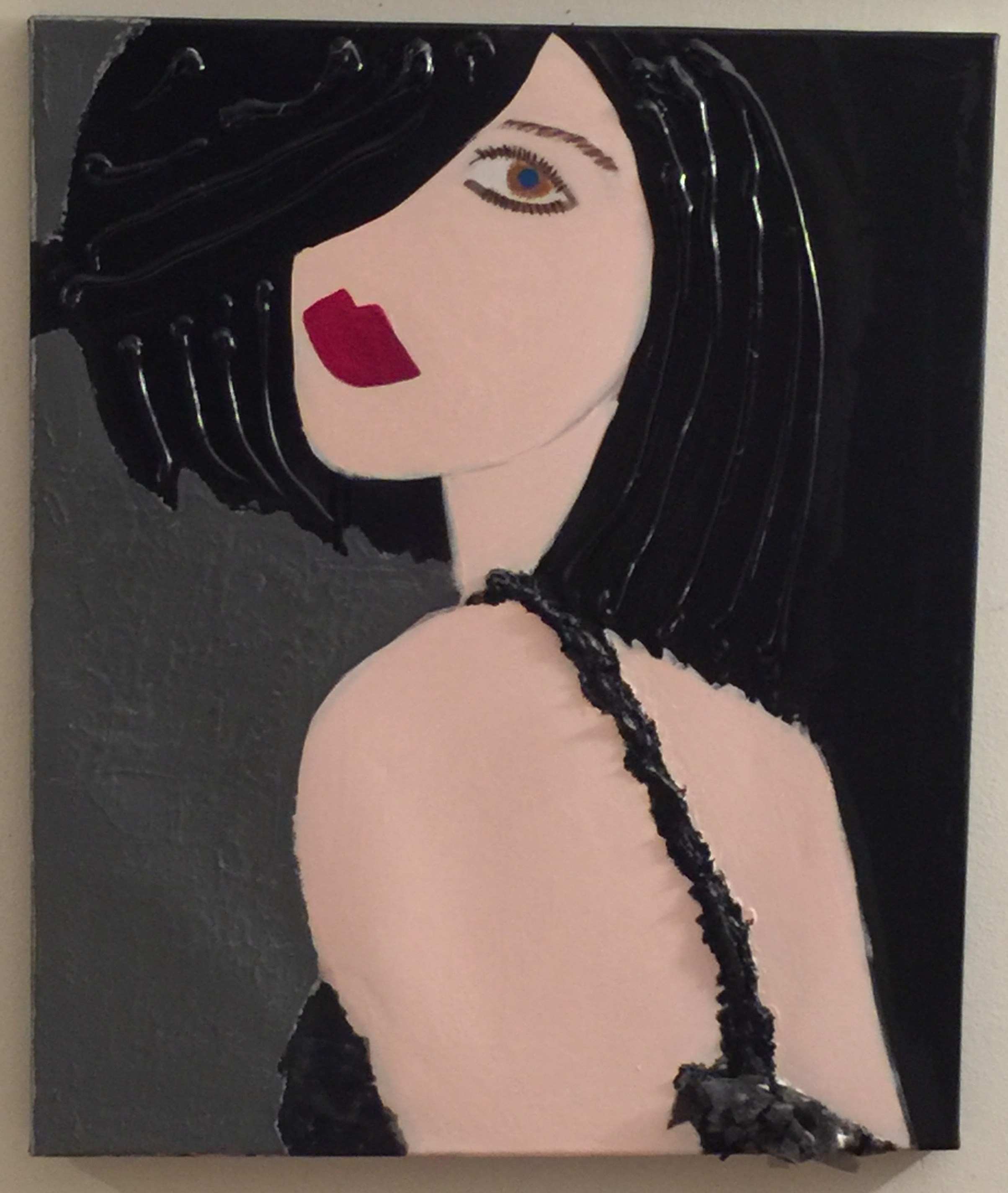 Hope your weekend is going well and that your week ahead is a bit warmer.

Plus, if you pay attention, you’ll notice that the days are getting longer. Every day is a little bit longer than the one before.  You’ll notice if you look for it.

It’s a good week to think about relativity, eh?

P.S. Thank you to Netflix for automatically starting the next episode.  That’s a really great feature that makes my quality of life better.  Or worse.  Not sure which.

Protect your most important relationship.

Use the good words.

Control what you can.