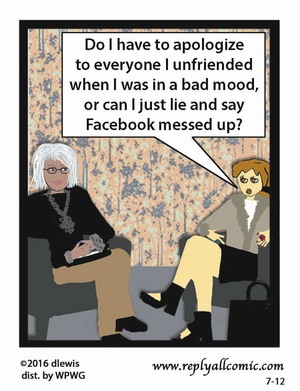 Back to Rob Kardashian and Part II of how his experiences with depression can help others.

(2) Sometimes it’s hard for the Person With Depression (PWD) to pick up the phone.

So there are a bunch of episodes where Rob disappears.

As the official disappearing member of my family, these episodes are especially special to me.

The thing is that making contact with family and friends is a lot of work for someone who is lost in the darkness of despair.

So actually, a lot of the emotional drama comes from that tug of war between the PWD and family or friends who wish the PWD would just get over it.

Yeah, I said just get over it.

Your favorite phrase and mine too.

Getting mad at the disappearing PWD isn’t really logical.

The disappearing PWD really just needs to be given time or a safe environment to be coaxed back into.

So getting mad at the PWD has the opposite effect; it pushes the PWD further away.

So don’t get angry.

And it doesn’t make sense, if you think about it.

The PWD isn’t trying to upset you. The PWD is just upset.

Either step back and give the PWD some space or work on making the environment safer for the PWD so that he or she will reengage more quickly.

More in a bit.

The puppy (who really isn’t a puppy anymore) is giving me the look.

The struggle is real.